We are offering a 6 month Maternity Contract in our Junior Primary School. The teaching position will commence at the start of Term 3 on Monday 13th July, 2020 and will finish Friday 11th December 2020. It is preferable that the person chosen for the position would be available from the 15th June in a transition period before they commence in Term 3.
<p><br /></p> 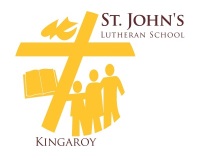 http://www.sjls.qld.edu.au
St John’s Lutheran School is located in the township of Kingaroy, Queensland. It is within an agricultural district, famous for its peanut and navy (baked) bean crops. It also has the only export accredited pig abattoir in Queensland, “Swickers”, with over 750 employees and the Tarong Power Station and associated Meandu Coal Mine are nearby. There are approximately 12,000 people in the town and 33,000 people in this South Burnett region which is the school’s catchment. Kingaroy is less than 3 hours north west of Brisbane and 2 hours west of the Sunshine Coast. St John’s has approximately 420 students across a Prep – Year 9 and takes pride in focusing on the wellbeing and development of the ‘whole’ child. St John’s focuses on providing quality education that encompasses the academic, social emotional and spiritual development of the child. St John’s Lutheran Primary School was established in 1989 by St John’s Lutheran Church Kingaroy. In 2013 St John’s became a school of the Lutheran Church of Australia – Queensland District as it prepared to become a secondary school in 2014. In 2015 St John’s became a P-9 Junior Secondary School enabling families to have their children be supported in a Christian learning environment through the early teenage years. There is a community Kindergarten co-located on our school grounds enabling us to offer parents the opportunity of having their pre-primary children at school on the same campus as their school age children. As Kingaroy has grown in the past years we have had the opportunity to double and triple stream across prep and primary year levels with single stream classes in secondary.
Save Job

<p>A job description, selection criteria and applicant Information Package can be obtained by downloading the documents on this site.  Please address the selection criteria in separate, concise statements and submit with a covering letter and Resume.  Refer to the application information pack for detailed instructions. Applications should be addressed to Private and Confidential, The Principal,  St John&#39;s Lutheran School, P O Box 506, Kingaroy  Q  4610</p>